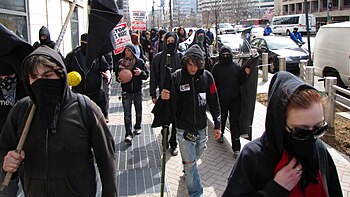 Black bloc in a feeder march near the World Bank, in Washington, DC.

A black bloc is a tactic for protests and marches whereby individuals wear black clothing, scarves, ski masks, motorcycle helmets with padding, or other face-concealing items.[1][2] The clothing is used to conceal marchers' identities, appear theoretically as one large unified mass, and promote solidarity.

The tactic was developed in the 1980s by autonomists protesting squatter evictions, nuclear power and restrictions on abortion among other things.[1] Black blocs gained broader media attention outside Europe during the 1999 anti-WTO demonstrations, when a black bloc damaged property of GAP, Starbucks, Old Navy, and other multinational retail locations in downtown Seattle.[1]

When used in the plural, black blocs refers to groups who have adopted the tactic.[3]

References in this section could be improved. 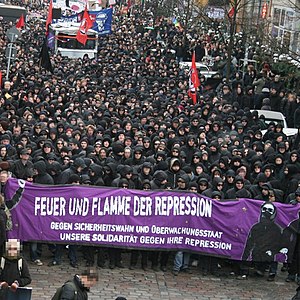 An Antifa black bloc in Germany

This tactic was developed following increased use of police force following the 1977 Brokdorf demonstration[4][5][6] by the German police in 1980, particularly aimed at anti-nuclear activists and squatters. Key areas for this development were Hafenstraße, Hamburg, and Kreuzberg, Berlin. These were social spaces occupied by dissidents who preferred to create their own social institutions based on communal living and alternative community centres. In June 1980, the German Police forcefully evicted the Free Republic of Wendland, an anti-nuclear protest camp in Gorleben, Wendland. This attack on 5,000 peaceful protesters led many former pacifists to become willing to use violent methods. By December 1980 the Berlin City Government organised an escalating cycle of mass arrests, followed by other local authorities across West Germany. The squatters resisted by opening new squats, as the old ones were evicted. Following the mass arrest of squatters in Freiburg, demonstrations were held in their support in many German cities. The day was dubbed Black Friday following a demonstration in Berlin at which between 15,000 and 20,000 people took to the streets and destroyed an expensive shopping area. The tactic of wearing identical black clothes and masks meant that the autonomen were better able to resist the police and elude identification. The German media labeled them der schwarze Block ("the black block"). In the Netherlands, similar militant resistance developed, but the wearing of ski-masks was less prevalent and the phrase Black Helmet Brigade was used.

In 1986 Hamburg squatters mobilised following attacks on the Hafenstraße. A demonstration of 10,000 took to the streets surrounding at least 1,500 people in a black bloc. They carried a large banner saying "Build Revolutionary Dual Power!" At the end of the march, the black bloc then engaged in street fighting that forced the police to retreat. The next day 13 department stores in Hamburg were set alight, causing nearly $10 million in damage. Later that year, following the Chernobyl disaster, militant anti-nuclear activists used the tactic.

On 1 May 1987, a peaceful peoples fest in Berlin-Kreuzberg was attacked by West German police.[7] In consequence of the unprovoked attack, thousands of people attacked the police with rocks, bottles and Molotov cocktails. The riots became famous after the police had to completely pull out of the so called "SO 36" Neighborhood in Kreuzberg for several hours, and rioters looted shops together with residents.[8]

When Ronald Reagan came to Berlin in June 1987, he was met by around 50,000 demonstrators protesting against his Cold War policies. This included a black bloc of 3,000 people. A couple of months later, police intensified their harassment of the Hafenstraße squatters. In November 1987, the residents were joined by thousands of other autonomen and fortified their squat, built barricades in the streets and defended themselves against the police for nearly 24 hours. After this the city authorities legalised the squatters residence.

On 1 May 1988, radical left groups organised a May Day demonstration through Berlin-Kreuzberg, ending in riots even heavier than the year before. The police were attacked with steel balls fired by slingshots, stones, fireworks and Molotov cocktails. On 2 May, headline of the Berlin newspaper B.Z. was "Beirut?? Nein, das ist Berlin!" (Beirut?? No, it´s Berlin!). The riots finally became a tradition in Berlin-Kreuzberg and have recurred every 1 May since, but never as fatally as in the first two years.[9] When the World Bank and the International Monetary Fund met in Berlin in 1988, the autonomen hosted an international gathering of anti-capitalist activists. Numbering around 80,000, the protesters greatly outnumbered the police. Officials tried to maintain control by banning all demonstrations and attacking public assemblies. Nevertheless, there were riots and upmarket shopping areas were destroyed.[10]

In the period after the Berlin Wall, the German black bloc movement continued traditional riots such as May Day in Berlin-Kreuzberg, but with decreasing intensity. Their main focus became the struggle against the recurring popularity of Neo-Nazism in Germany. The "turn" came in June 2007, during the 33rd G8 Summit. A black block of 3,000 people built barricades, set cars alight and attacked the police during a mass demonstration in Rostock.[11] 400 police officers were injured, and also about 500 demonstrators and activists. According to the German Verfassungsschutz, the weeks of organisation before the demonstration and the riots themselves were amounted to a revival for the militant left in Germany. Since the "Battle of Rostock", traditional "May Day Riots" after demonstrations every May 1 in Berlin, and since 2008 also in Hamburg, became more intense, and violence of the autonomen against police officers and political enemies at demonstrations of radical left groups have dramatically increased.[12]

The first recorded use of the tactic in United States of America was in 1989 at a protest at the Pentagon. Other early use in the US were the Earth Day Wall Street Action in 1990 and the February 1991 protests against the Gulf War. These were initiated by Love and Rage, a North American revolutionary anarchist organization active in New York. Black blocs gained significant media attention when a black bloc caused damage to property of GAP, Starbucks, Old Navy, and other retail locations in downtown Seattle during the 1999 anti-WTO demonstrations.[13] They were a common feature of subsequent anti-globalization protests.[14] During the 2010 G20 Summit in Toronto, a black bloc riot damaged a number of retail locations including an Urban Outfitters, American Apparel, Adidas Store, Starbucks and many banking establishments.[15][16]

A group of about 400 black bloc anarchists took part in the 2011 London anti-cuts protest where they attacked various high end retail outlets; according to journalist Paul Mason this may have been the largest ever black block assembly in the UK. Mason says some of the members were anarchists from Europe, others were British students radicalised after participation in the 2010 UK student protests. [17]

Police and security services have infiltrated black blocs with undercover officers. Since all members conceal their identities, it is harder to recognize infiltrators. Allegations first surfaced after several demonstrations. At the 2001 G8 summit in Genoa, amongst the many complaints about the police [18] there was mention of video footage in which "men in black were seen getting out of police vans near protest marches."[19] In August 2007, Quebec police admitted that "their officers disguised themselves as demonstrators." On these occasions, some were identified by genuine protesters because of their police-issue footwear.[20][21]

Tactics of a black bloc can include offensive measures such as street fighting, vandalism of corporate property, rioting, and demonstrating without a permit, but mainly consists of defensive tactics like misleading the authorities, assisting in the escape of people arrested by the police, administering first aid to persons affected by tear gas, rubber bullets and other riot control measures in areas where protesters are barred from entering, building barricades, and resisting the police. [22][23] Property destruction carried out by black blocs tends to have symbolic significance: common targets include banks, institutional buildings, outlets for multinational corporations, gasoline stations, and video-surveillance cameras. [24]

There may be several blocs within a particular protest, with different aims and tactics.[25] As an ad hoc group, blocs often share no universally common set of principles or beliefs[25] apart from an adherence to–usually–radical left or autonomist values, although some anarchist groups have called for the Saint Paul Principles to be adapted as a framework in which diverse tactics can be deployed. [26] A few radical right-wing groups, like some of the "autonomous nationalists" of Europe[27] or the Australian National-Anarchists[28] have adopted "black bloc" tactics and dress.

Please use day/month/year dates when editing this article.