The Workers' Party (Portuguese Wp→: Partido dos Trabalhadores, PT) is a centre-left[3] political party in Brazil. Launched in 1980, it is recognized as one of the largest and most important left-wing movements of Latin America. It governs at the federal level in a coalition government with several other parties since January 1, 2003. After the 2010 parliamentary election Wp→, PT became the largest party in the Chamber of Deputies of Brazil and the second largest in the Senate of Brazil for the first time ever.[4] Luiz Inácio Lula da Silva, the President of Brazil with the highest approval rating in the history of the country, is PT's most prominent member.[5] His successor, Dilma Rousseff, is also a member of PT; she took office on January 1, 2011. The party's symbols are the red flag with a white star in the center; the five-pointed red star, inscribed with the initials "PT" in the center; and the Workers Party's anthem.[6] Workers' Party's TSE (Supreme Electoral Court) Identification Number is 13.

Though never nominally a Communist party (PT was founded in 1980, when Communist political parties were still banned in Brazil), the party was always a staunch supporter of Cuba policies and opposed the United States’ embargo against Cuba.

Both born from the opposition to the Brazilian military dictatorship, PT and the Brazilian Social Democracy Party are since the mid-1990s the biggest adversaries in contemporary Brazilian politics, with their candidates finishing either first or second on the ballot on the last five presidential elections. Both parties generally prohibit any kind of coalition or official cooperation with each other.

The Workers' Party was launched by a heterogeneous group, formed by trade unionists, left-wing intellectuals and artists, and Catholics linked to the liberation theology,[7] on February 10, 1980 at Colégio Sion in São Paulo, a private Catholic school for girls.[8] The party emerged as a result of the approach between the labor movements in the ABC Region – such as the Conferência das Classes Trabalhadoras (Conclat), which later developed into the Central Única dos Trabalhadores (CUT) – which carried major strikes from 1978 to 1980, and the old Brazilian left-wing, whose militants were returning from exile with the 1979 Amnesty law.[8]

The party was launched under a democratic socialism trend.[9] After the 1964 coup d'état, Brazil's main federation of labor unions, the General Command of Workers (Comando Geral dos Trabalhadores – CGT) – which since its formation gathered leaders approved by the Ministry of Labour, a practice tied to the fact that since the Vargas dictatorship, unions had become quasi-state organs – was dissolved, while unions themselves suffered intervention of the military regime. The resurgence of an organized labour movement, evidenced by strikes in the ABC Region on the late 1970s led by Luiz Inácio Lula da Silva, enabled the reorganization of the labour movement without the direct interference of the state. The movement originally sought to act exclusively in union politics, but the survival of a conservative unionism under the domination of the State (evidenced in the refoundation of CGT) and the influence exercised over the trade union movement by leaders of traditional left-wing parties, such as the Brazilian Communist Party, forced the unionist movement of ABC, encouraged by anti-Stalinist leaders, to organize its own party, in a strategy similar to that held by the Solidarność union movement in Poland.

Therefore, the Workers' Party emerged rejecting the traditional leaders of official unionism, and seeking to put into practice a new form of democratic socialism, trying to reject political models it regarded as decaying, such as the Soviet and Chinese ones. It represented the confluence between unionism and the anti-Stalinist intelligentsia.

Since 1990, the Workers' Party has grown in popularity on the national stage by winning the elections in many of the largest Brazilian cities, such as São Paulo, Fortaleza, Belo Horizonte, Porto Alegre, and Goiânia, as well as in some important states, such as Rio Grande do Sul, Espírito Santo, and the Federal District. This winning streak culminated with the victory of its presidential candidate, Luiz Inácio Lula da Silva in 2002, who succeeded Fernando Henrique Cardoso of the Brazilian Social Democracy Party (Partido da Social Democracia Brasileira – PSDB). PSDB, for its defense of economic liberalism, is the party's main electoral rival, as well as the Democrats, heir of the National Renewal Alliance Party (Aliança Renovadora Nacional – ARENA), ruling party during the military dictatorship. Along with the Socialist People's Party (Partido Popular Socialista – PPS), a dissidence of the Brazilian Communist Party (Partido Comunista Brasileiro – PCB), they form the centre-right opposition to the Lula administration.

In the 1989 general elections, Lula surprisingly went to the second round with Fernando Collor de Mello. Even though all center and left-wing candidates of the first round united around Lula's candidacy, Collor's campaign was strongly supported by the mass media (notably Rede Globo, as seen on the documentary Beyond Citizen Kane) and Lula lost in the second round by a close margin of 5.7%.[12][13]

Leading up to the 1994 general elections, Lula was the leading Presidential candidate in the majority of polls. As a result, centrist and right-wing parties openly united for Fernando Henrique Cardoso's candidacy. Cardoso, as Minister of Economy, created the Real Plan, which established the new currency and subsequently ended inflation and provided economic stability. As a result, Cardoso won the election in the first round with 54% of the votes. However, it has been noted that "the elections were not a complete disaster for PT, which significantly increased its presence in the Congress and elected for the first time two state governors".[14] Cardoso would be re-elected in 1998.

After the detrition of PSDB's image and as a result of an economic crisis that burst in the final years of Cardoso's government, Lula won the 2002 presidential election in the second round with over 52 million votes, becoming the most voted president in history, surpassing Ronald Reagan. However, Lula's record was surpassed by George W. Bush (in his re-election campaign) and Barack Obama.

On October 29, 2006, the Workers' Party won 83 seats in the Chamber of Deputies and 11 seats in the Senate. Luiz Inácio Lula da Silva was re-elected with more than 60% of the votes, extending his position as President of Brazil until January 1, 2011.[15] 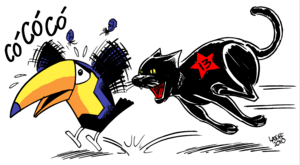 PT as a black cat chasing a toucan (PSDB's mascot) by Carlos Latuff.

In the 2010 general elections, held on October 3, PT gained control of 17.15% of the seats in the Chamber of Deputies, a record for the party since 2002. With 88 seats gained, it became the largest party in the lower chamber for the first time ever. PT also became the second largest party in the Federal Senate for the first time, after electing of 11 Senators, making a total of 14 Senators for the 2010–2014 legislature. Its national coalition gained control of 311 seats in the lower house and 50 seats in the upper house, a broad majority in both houses which the Lula administration never had. This election also saw the decrease in the number of seats controlled by the centre-right opposition bloc; it shrank from 133 to 111 deputies. The left-wing opposition, formed by PSOL, retained control of three seats.

The party was also expected to elect its presidential candidate Dilma Rousseff in the first round. However, she was not able to receive the necessary amount of valid votes (over 50%) and a second round, in which she scored 56% of the votes, took place on October 31, 2010. On January 1, 2011, she was inaugurated and thus became the first female head of government ever in the history of Brazil, and the first de facto female head of state since the death of Maria I, Queen of the United Kingdom of Portugal, Brazil and the Algarves, in 1816.

Also in the 2010 elections PT retained control of the governorships of Bahia, Sergipe, and Acre, in addition to gaining back control of Rio Grande do Sul and the Federal District. Nevertheless, it lost control of Pará. Candidates supported by the party won the race in Amapá, Ceará, Espírito Santo, Maranhão, Mato Grosso, Pernambuco, Piauí, and Rio de Janeiro, which means that PT would participate in 13 out of 27 state governorships.

The changes in the political orientation of PT (from a far-left socialist to a centre-left social-democratic party) after Lula was elected President were well received by many in the population, but, as a historically more radical party, PT has experienced a series of internal struggles with members who have refused to embrace the new political positions of the party. These struggles have fueled public debates, the worst of which had its climax in December 2003, when four dissident legislators were expelled from the party for not following majority sanctioned political decisions.[16] Among these members were congressman João Batista Oliveira de Araujo (known as Babá), and senator Heloísa Helena, who formed the Partido Socialismo e Liberdade (PSOL) in June 2004 and ran for President in 2006, becoming, at the time, the woman who had garnered the most votes in Brazilian history.

In another move, 112 members of the radical-wing of the party announced they were abandoning PT in the World Social Forum, in Porto Alegre, on January 30, 2005. They also published a manifesto entitled Manifesto of the Rupture that states that PT "is no longer an instrument of social transformation, but only an instrument of the status quo", continuing with references to the International Monetary Fund and other economic and social issues.

This scandal was unfolded around September 2006, just two weeks before general elections. As a result, Berzoni left the coordination of Lula's re-election after an alleged use of PT's budget (which is partially state-funded, through party allowances) to purchase, from a confessed fraudster, a dossier that would be used to attack political adversaries. On April 25, 2007, the Supreme Electoral Tribunal unanimously cleared Lula of any responsibility for this scandal.[17]

In July 2005, members of the party suffered a sequence of corruption accusations, started by a deputy of the Brazilian Labour Party (Partido Trabalhista Brasileiro – PTB), Roberto Jefferson.[18] Serious evidence for slush funding and bribes-for-votes were presented, dragging PT to the most serious crisis in its history – known colloquially as the Mensalão. José Genoíno resigned as president of the party and was replaced by Tarso Genro, former mayor of Porto Alegre. A small minority of party members defected as a result of the crisis. Most of them went to PSOL.

In 2012, José Dirceu and other high rank members of PT were condemned by their Mensalão crimes.

Since its inception the party has been led by:

There are about thirty factions (tendências) within the PT, ranging from Articulação, the center-left group that Lula is a part of, to Marxists and Christian socialists.

Relations with the British Labour Party

Prior to the 1998 general elections, Peter Mandelson, a close aide to British prime minister and Labour Party leader Tony Blair, stated that the Workers' Party's proposals for the 1998 presidential elections represented "an old-fashioned and out-of-date socialism." Representatives of the Workers' Party publicly protested this statement.[19] Labour-Workers' Party relations have since improved.

Its members are known as petistas, from the Portuguese acronym "PT".