The "Kingdom of Redonda" is a name for the micronation aspect of the tiny uninhabited Caribbean island of Redonda.

This islet is situated between the islands of Nevis and Montserrat, within the inner arc of the Leeward Islands chain, in the West Indies. The island is currently legally a dependency of the country of Antigua and Barbuda. The island is uninhabited, and indeed is more or less uninhabitable since there is no source of freshwater, and most of the island is extremely steep and rocky, with only a relatively small area of grassland at the top.

Redonda also is, or appears to be, a micronation which may, arguably and briefly, actually have existed as an independent kingdom during the 19th century. The title to this supposed kingdom is still contested to this day in a half-serious fashion. The "Kingdom" is also often associated with a number of supposed aristocratic members, whose titles are given out freely by whomever is currently the "King". Currently there are a number of different individuals in several different countries who claim to be the sole legitimate "King" of Redonda, but these claims appear to be substantially of the nature of tall tales or humorous hoaxes.

The idea of the kingdom appears to originate with M. P. Shiel, 1865-1947, an author of fantasy fiction. He claimed that in 1865, his father Matthew Dowdy Shiell, from the nearby island of Montserrat, proclaimed himself to be the rightful, and supposedly legal, "King" of the island of Redonda in order that he might establish his son as the rightful heir to the throne. This story, as first recounted by the son in a promotional leaflet for his books, may be partly or entirely fictional.

History of the "Kingdom" 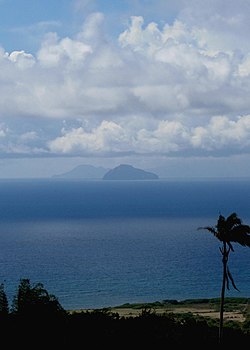 A view of Redonda from the island of Nevis, with Montserrat faintly visible in the distance.

The history of the "Kingdom" of Redonda is shrouded in doubt and legend, and it is difficult to separate fact from fiction.

M. P. Shiel, an author of works of fantasy fiction, was the first person to ever mention the idea of the "Kingdom of Redonda" and that was in 1929, in a promotional pamphlet for a reissue of his books. [1]

According to one of several different versions of the story, his father, Matthew Dowdy Shiell, a banker from Montserrat, claimed the island when his first son, Matthew Phipps Shiell, was born. Supposedly the father felt he could legitimately do this, because it appeared to be the case that no country had officially claimed the islet as territory. Sheill senior is also said to have requested the title of King from Queen Victoria, and as legend has it, she granted it to him as long as there was no revolt against colonial power. The son (originally named Matthew Phipps Shiell but later known as M.P. Shiel) was supposedly crowned on Redonda at the age of 15 by a bishop from Antigua. [2]

However, the whole story appears to have originated decades later with the son, M.P. Shiel, a fantasy and science fiction writer best known for his 1901 novel The Purple Cloud, and so it is possible that some, or most, or possibly all of the story of his being made king of Redonda, may in fact be pure invention.

In any case, again according to one version of the story, M.P. Shiel in later life gave the title, and the rights of his work, to the writer John Gawsworth (Terence Ian Fytton Armstrong), who seems to have sold the title several times, due to permanent bankruptcy. Gawsworth in turn is considered to have bestowed the title, and the rights to his and Shiel's work, to Arthur John Roberts.

Roberts resigned his title in 1997 and named William Leonard Gates as his successor (and bearer of the rights of the work of both Shiel and Gawsworth).

A quote from King Juan II himself (according to King Robert the Bald): [3]

The legend is and should remain a pleasing and eccentric fairy tale; a piece of literary mythology to be taken with salt, romantic sighs, appropriate perplexity, some amusement, but without great seriousness. It is, after all, a fantasy.

The Spanish writer Javier MarÃ­as, one of the current claimants of Redonda, tells the story of his "coronation" in Negra espalda del tiempo (published in English as Dark Back of Time). He operates a pet publishing house under the name of Reino de Redonda ("Kingdom of Redonda"), and has created a literary prize with the same name. The reward is several thousand euros and a Redondan duchy.