The empire on which the sun never sets

This article contains significant unique material and should not be replaced by an imported or updated Wikipedia article. Read more...

The phrase, "the Empire on which the sun never sets", has been used with variations to describe certain global empires that were so extensive that there was always at least one part of their territory in daylight.

Georg Büchmann traces the idea to a speech in Herodotus' Histories, made by Xerxes I of Persia before invading Greece.[1][2]

In the 16th century, the phrase (Template:Lang-es) was first used to describe the Spanish Empire. It originated with a remark made by Fray Francisco de Ugalde to Charles V, Holy Roman Emperor (Charles I of Spain), who as emperor of the Holy Roman Empire and king of Spain, had a large empire, which included many territories in Europe and vast territories in the Americas.

The phrase gained added resonance during the reign of Charles's son, King Philip II of Spain. The Philippines was obtained by Spain in 1565. When King Henry of Portugal died, Philip II was recognised as King of Portugal in 1581, resulting in a personal union of the crowns. He now reigned over all his father's possessions (except the Holy Roman Empire) and the Portuguese Empire, which included territories in South America, Africa, Asia and islands in the Atlantic, Indian and Pacific oceans.

In the early 17th century, the phrase was familiar to John Smith of Jamestown,[4] and to Francis Bacon, who writes: "both the East and the West Indies being met in the crown of Spain, it is come to pass, that, as one saith in a brave kind of expression, the sun never sets in the Spanish dominions, but ever shines upon one part or other of them : which, to say truly, is a beam of glory [...]"[5] Thomas Urquhart wrote of "that great Don Philippe, Tetrarch of the world, upon whose subjects the sun never sets."[6]

In the German dramatist Friedrich Schiller's 1787 play, Don Carlos, Don Carlos's father, Philip II, says Template:Lang-de ("I am called / The richest monarch in the Christian world; / The sun in my dominions never sets.")[7]

Joseph Fouché recalled Napoleon saying before the Peninsular War, "Reflect that the sun never sets in the immense inheritance of Charles V, and that I shall have the empire of both worlds."[8] This was cited in Walter Scott's Life of Napoleon[3][9]

It has been claimed that Louis XIV of France's emblem of the "Sun King" and associated motto Nec pluribus impar were based on the solar emblem and motto of Philip II.[10] 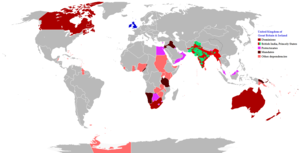 The British Empire in 1919, at its greatest extent with presence on all inhabited continents.

In the 19th century, it became popular to apply the phrase to the British Empire. It was a time when British world maps showed the Empire in red or pink to highlight British imperial power spanning the globe. Scottish author, John Wilson, writing as "Christopher North" in Blackwood's Magazine in 1829, is sometimes credited as originating the usage.[11][12][13][14] However, George Macartney wrote in 1773, in the wake of the territorial expansion that followed Britain's victory in the Seven Years' War, of "this vast empire on which the sun never sets, and whose bounds nature has not yet ascertained."[15] In a speech on 31 July 1827, Rev. R. P. Buddicom said, "It had been said that the sun never set on the British flag; it was certainly an old saying, about the time of Richard the Second, and was not so applicable then as at the present time."[16] In 1821, the Caledonian Mercury wrote of the British Empire, "On her dominions the sun never sets; before his evening rays leave the spires of Quebec, his morning beams have shone three hours on Port Jackson, and while sinking from the waters of Lake Superior, his eye opens upon the Mouth of the Ganges."[17]

Daniel Webster famously expressed a similar idea in 1834: "A power which has dotted over the surface of the whole globe with her possessions and military posts, whose morning drumbeat, following the sun and keeping company with the hours, circles the earth with one continuous and unbroken strain of the martial airs of England."[3][18] In 1839, Sir Henry Ward said in the House of Commons, "Look at the British Colonial empire — the most magnificent empire that the world ever saw. The old Spanish boast that the sun never set in their dominions, has been more truly realised amongst ourselves."[19] By 1861, Lord Salisbury complained that the £1.5 million spent on colonial defence by Britain merely enabled the nation "to furnish an agreeable variety of stations to our soldiers, and to indulge in the sentiment that the sun never sets on our Empire".[20]

In James Joyce's Ulysses, when Mr. Deasy asks Stephen what an Englishman's proudest boast is, Stephen offers "That on his empire [...] the sun never sets." Mr. Deasy retorts "That's not English. A French Celt said that." Critics suggest Mr Deasy was mistaken.[21][22]

In an 1865 speech in Oakland, California, Rev. W. B. Brown of New Jersey quipped that the reason the sun never set upon the Empire was that God did not trust the British in the dark[23] - the quip has been attributed to Abraham Lincoln,[24][25] among others.

According to Richard Lederer's mock history of the world assembled from errors found in student-written papers, "[t]he sun never set on the British Empire because the British Empire was in the east and the sun sets in the west."[26]

"Ten Thousand Miles From Tip to Tip", 1898. The sunbeams of this famous cartoon are a visual reference to the expression.

From the mid-nineteenth century, the image of the sun never setting can be found applied to Anglophone culture, explicitly including America as well as Britain, for example in a speech by Alexander Campbell in 1852.[27]

A 1991 history book discussion of U.S. expansion says "Today ... the sun never sets on American territory, properties owned by the U.S. government and its citizens, American armed forces abroad, or countries that conduct their affairs within limits largely defined by American power."[31]

Although the United States no longer has any possessions further west than Guam or further east than the Virgin Islands, it currently has military presence in Afghanistan, the British Indian Ocean Territory, Germany, Iraq, Japan, South Korea and other countries. The phrase is sometimes used critically with the implication of American imperialism, as in the title of Joseph Gerson's book, The Sun Never Sets: Confronting the Network of Foreign U.S. Military Bases.[32]

San Francisco librarian Dick Dillon is credited with the story of a baseball umpire who spanks his little boy and then, by way of apology, invites him to sit on his lap. The boy refuses, proving that "the son never sits on the brutish umpire".[33]

In a 1997 article, Edward Johnson referred to Dag Hammarskjöld as "The umpire on whom the sun never sets".[34]

The monologue "Tried by the Centre Court" by Flanders and Swann ends with the line: "The umpire on whom the sun never sets."

Empires on which the sun never sets

At the present day there are still two "empires" which always have the sun above the horizon somewhere within them:

Empires on which the sun never set

The following empires satisfied the condition in the past: