From Crestone News and Information
Jump to: navigation, search
Large Russian sage bush near the credit union
Russian sage is rangeland brush from areas of central Asia with a similar climate to the San Luis Valley and the High Plains. Deer do not eat it, but it is brushy and spreads, not rapidly, but the clumps grow and it can reseed without being irrigated. More or less a weed from another place. 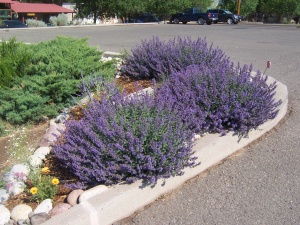 An attractive cultivar of Russian sage

There are some attractive cultivars such as the planting at the south entrance to the Post office.

Russian sage thrives in full sun in dry locations. It is a bush, a Wikipedia:Subshrub. Its growing pattern will be poor in wet or shady locations, thin and floppy.[1] Russian sage requires regular trimming to maintain a nice appearance; the tips of branches will die over winter and may be trimmed to maintain a fresh appearance, or the entire plant may be cut off above the crown, if the plant is in a favored location.[2] Reseeding is retarded by using stone or bark mulch, but the plant will continue to send out suckers and clumps will expand.

Russian sage can be propagated by cuttings. Because its woody crown is resistant to division, softwood cuttings are taken from shoots near the base, generally in late spring. Hardwood cuttings selected in mid-to-late summer also provide a viable propagation technique. The plant can be grown from seed. Seeds require exposure to cold for 30–160 days to germinate. Seed-raised specimens may not preserve the characteristics of named cultivars.

Russian sage is not edible, It is not sage or related to sage. It is not palatable to deer or rabbits.