Please note: Wikinfo does not give legal advice.

This article is about public ownership of creative works. For use in relationship to public lands, see public domain (land).

In a general context, public domain may refer to ideas, information, and works that are "publicly available", but in the context of intellectual property law (which includes copyright, patents, and trademarks), public domain refers to works, ideas, and information which are intangible to private ownership and/or which are available for use by members of the public.[2]

Newton's own copy of his Principia, with hand-written corrections for the second edition 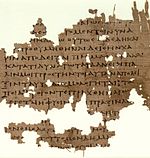 Papirus Oxyrhynchus, with fragment of Plato's The Republic

Definitions of the boundaries of the public domain in relation to copyright, or intellectual property more generally, regard the public domain as a negative space, that is, it consists of works that are no longer in copyright term or were never protected by copyright law.[8] According to James Boyle this definition underlines common usage of the term public domain and equates the public domain to public property and works in copyright to private property. However, the usage of the term public domain can be more granular, including for example uses of works in copyright permitted by copyright exceptions. Such a definition regards work in copyright as private property subject to fair use rights and limitation on ownership.[1] A conceptual definition comes from Lange, who focused on what the public domain should be: "it should be a place of sanctuary for individual creative expression, a sanctuary conferring affirmative protection against the forces of private appropriation that threatened such expression".[8] Patterson and Lindberg described the public domain not as a "territory", but rather as a concept: "There are certain materials - the air we breathe, sunlight, rain, space, life, creations, thoughts, feelings, ideas, words, numbers - not subject to private ownership. The materials that compose our cultural heritage must be free for all to use no less than matter necessary for biological survival."[9] The term public domain may also be interchangeably used with other imprecise and/or undefined terms such as the "public sphere" or "commons", including concepts such as "commons of the mind", the "intellectual commons", and the "information commons".[5] 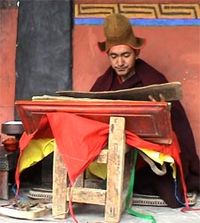 Value of the public domain

Public domain in the information society

{{#invoke:main|main}} Some works may never fully lapse into the public domain. A perpetual crown copyright is held for the Authorized King James Version of the Bible in the UK.[24] While the copyright of the play Peter Pan, or the Boy Who Wouldn't Grow Up by J. M. Barrie has expired in the United Kingdom, it was granted a special exception under the Copyright, Designs, and Patents Act (Schedule 6)[25] that requires royalties to be paid for performances within the UK, so long as Great Ormond Street Hospital (to whom Barrie gave the rights) continues to exist.

Works not covered by copyright law

The underlying idea that is expressed or manifested in the creation of a work generally cannot be the subject of copyright law (see idea-expression divide). Mathematical formulae will therefore generally form part of the public domain, to the extent that their expression in the form of software is not covered by copyright.

Works created before the existence of copyright and patent laws also form part of the public domain. For example, the Bible and the inventions of Archimedes are in the public domain, but copyright may exist in translations or new formulations of these works.

The expiration of a copyright is more complex than that of a patent. Historically the United States has specified terms of a number of years following creation or publication; this number has been increased several times. Most other countries specify terms of a number of years following the death of the last surviving creator; this number varies from one country to another (50 years and 70 years are the most common), and has also been increased in many of them. See List of countries' copyright length. Legal traditions differ on whether a work in the public domain can have its copyright restored. Term extensions by the U.S. and Australia generally have not removed works from the public domain, but rather delayed the addition of works to it. By contrast, a European Union directive harmonizing the term of copyright protection was applied retroactively, restoring and extending the terms of copyright on material previously in the public domain.

{{#invoke:main|main}} In most countries the term for patents is 20 years, after which the invention becomes part of the public domain.

Because trademarks are registered with governments, some countries or trademark registries may recognize a mark, while others may have determined that it is generic and not allowable as a trademark in that registry. For example, the drug "acetylsalicylic acid" (2-acetoxybenzoic acid) is better known as aspirin in the United States—a generic term. In Canada, however, "aspirin" is still a trademark of the German company Bayer. Bayer lost the trademark after World War I, when the mark was sold to an American firm. So many copy-cat products entered the marketplace during the war that it was deemed generic just three years later.[29]

Although Hormel resigned itself to genericide,[30] it has fought attempts by other companies to register "spam" as a trademark in relation to computer products.[31]