Cesidio Tallini (New York, 10 May 1962 - ) — also known as MT Kaisiris Tallini, Sachem Wequarran Archimedes, or BCT — is the Bishop and founder of the Cesidian Church, and the Chancellor of Saint René Descartes University. Tallini is the world's first micronationalist recognised in de jure, or acknowledged in de facto fashion by several government or quasi-government bodies. He is also the first micronationalist to actually be recognised for multiple nationalities or citizenships within the same developing new region of the world. Tallini has assisted two micronations — Principado da Pontinha and Kingdom of Ourania — with their development; is a Native American Medicine Man by adoption; claims two Native African — Republic of Cabinda and Southern Cameroons — citizenships by naturalisation; and claims to be the world's first full Antarctic citizen by affiliation.

Tallini has earned both American and Italian high school diplomas in the past; has earned several different post-secondary education diplomas and certificates, including a National Work Readiness Credential from the National Work Readiness Council, and a Certificate of Qualification to Practice from the Law Society of Cabinda; and has earned a BS degree from the University of Phoenix, another BSc degree, two religious doctorate degrees, and was awarded two honourary doctorates.

Finally, Tallini is also the Guru and founder of Global Earth Oceans (GEO), a new region under development.

Tallini was born in Jamaica Hospital, New York, on 10 May 1962. He has resided for extensive periods of time both in Italy and in the United States. He moved to Italy at the age of 9, where he continued his education. He eventually earned an Italian Diploma di Maturità Scientifica from La Scuola D'Italia "Guglielmo Marconi" of New York City, and an American High School Equivalency Diploma from the University at Albany (SUNY).

Tallini is an honorary alumnus of the University of California at Berkeley since October; an honorary alumnus of Pennsylvania State University since May; and an international life member of the Chamber of Computer Logistics People (CCLP) Worldwide since August. Most later developments in Tallini's life are at least indirectly related to Cesidian societal-political science.

Tallini co-founded the Cesidian Root in September but no longer has a relationship with the organisation.

On 30 April Tallini earned a Bachelor of Science in Information Technology from the University of Phoenix (with honours).

On 13 December René Descartes is consecrated as the first saint of the Cesidian Church. 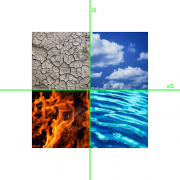 Field of Everything
Tallini also founded the United Micronations Multi-Oceanic Archipelago (UMMOA) political party in May but disbanded the party in June.

On 8 August the first Print Monopoly ⓅⓂ was issued.

On 27 January the Fifth World Community (5WC) was made a Google "City Hall".

Tallini World Formula
On 8 July Tallini was ordained as an Independent Catholic Priest and appointed to the title of Bishop, with apostolic succession and lineage to Christ. He also became a member of the Board of Bishops of the Universal Life Church World Headquarters.

On 11 July Tallini was spiritually adopted into the Nemenhah Band and Native American Traditional Organization, and became a Nemenhah Medicine Man. On 20 February Tallini was also ordained into the Native American Church of the Nemenhah Indigenous Traditional Organization, and became a Nemenhah Certified Minister and Practitioner of the Sahaptan Healing Way.

On 1 November upon certification by the Examining Committee of the Law Society of Cabinda, Tallini was admitted as an Advocate, and is now authorised to practice before all the Courts and Tribunals of the Republic of Cabinda.

On 23 January Tallini was appointed Communications Director for the Organization of Emerging African States (OEAS). 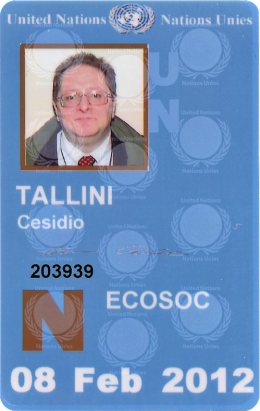 UN Grounds Pass issued to Tallini on 30 Jan
During the 7th Meeting of the Committee on NGOs, held on 2 February at the United Nations Headquarters in New York, the Chamber of Computer Logistics People Worldwide (CCLP Worldwide) was recommended for Special Consultative Status. This development became possible after CCLP Worldwide's Special Representative Cesidio Tallini managed to overcome to the persistent objections of the Distinguished Representative of Pakistan on the night of 1 February. In August CCLP Worldwide was granted Special Consultative Status with the United Nations' Economic and Social Council (ECOSOC).

On 27 December Tallini was made Ambassador at Large of Antarctica and Unrepresented or Underrepresented Polities for The Multipurpose Inter-Parliamentary Union (TMIPU).

On 31 December Tallini was appointed Interim Deputy Minister of Information for the Republic of Cabinda.

On 26 April it is first noticed that the Ryamecah Confederation had been accepted by China's General Administration of Press and Publication agency.

On 7 June the Paradiplomatic Affairs (PDA) agency was launched. 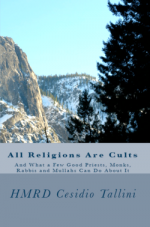 All Religions Are Cults
On 3 September the Hernici (8ED) tribe is formally registered with Paradiplomatic Affairs (PDA). This marks the beginning of the official existence of the Aboriginal European Hernici (8ED) Tribe — the Hernici started less officially on 10 August.

On 22 September the Government of Southern Cameroons recognises the UMMOA's Aphrodite Island claim.

On 27 December the UMMOA Collective Membership Mark [UMMOA™] application was filed by the United States Patent and Trademark Office (USPTO), and it was assigned serial number '86153190'.

On 9 January Tallini provides the first services as Ambassador at Large of Antarctica to a Native Antarctican.

On 3 October it is first noticed that UMMOA English (UGV; en-UGV; Ⓤ) had appeared authoritatively in Google searches.

On 6 December Global Earth Oceans (GEO) was made a Google "Government Office".

On 1 March the Winnecomac (or Winnecomaq) claim/name is accepted by author and sociologist Christopher F Roth.

On 5 November the Aphrodite Island claim/name is accepted by author and geographer Nick Middleton (in the English language).

On 11 November the Cyberterra Mean Time (CMT) standard appeared in AcronymFinder for the first time.

On 21 January the UK's Foreign and Commonwealth Office published a summary of the UMMOA government's views. This is the first indirect acknowledgement of the work of the Paradiplomatic Affairs (PDA) agency.

On 22 January the Office of the Geographer, Ethnographer, and Linguist (OGEL) is put into action through a special first article.

On 28 June the Kingdom of Ourania unilaterally recognised The Tallini Family (TTF) as a nation.

On 5 October the Indigo Race (or Homo sapiens ethicus/Homo noeticus) concept is accepted by author and social anthropologist Beth Singler.