From Communpedia
(Redirected from North Korea)
Jump to: navigation, search

The Democratic People’s Republic of Korea, generally called North Korea, is a country in northeast Asia in the north half of the Korean Peninsula

. The country follows a form of left-nationalist ideology called Juche, or self-sufficiency[9]. Juche is considered a kind of socialism, but many socialists argue that the DPRK can be considered really socialist. North Korea’s claims to control over the entire Korean peninsula are contested by South Korea, a capitalist nation originally ruled by dictator Syngman Rhee[10]. From 1950-1953, the two sides fought the Korean War, which failed to result in a decisive victory for either side.

The highest organ of state power in North Korea is the Supreme People’s Assembly. The other bodies are the National Defence Commission, chaired by Kim Jong-un, the Presidium, chaired by Kim Yong-nam, and the cabinet (government ministers), chaired by Choe Yong-rim[11].

North Korea’s fate first diverged from South Korea in 1945. In that year, the Soviet Army liberated North Korea from Japanese colonial occupation[12] and agreed with the United States to hold elections for a unified Korean government. However, in the elections in the South were rigged, installing American puppet[13] Syngman Rhee. The North declined to participate, and held separate elections in won by the Korean Workers' Party and Kim Il-sung. 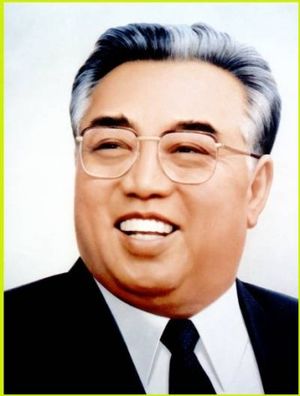 Meanwhile, in South Korea, Syngman Rhee’s dictatorship was characterized by immense repressions, actively aided by American forces under Lt. Gen. John R. Hodge[14]. For example, in April Syngman Rhee’s forces laid waste to Jeju Island as a punishment for an anti-government demonstration, killing 60,000 islanders[15]. Outraged, massive guerrilla resistance movements were founded across South Korea, under the leadership of the Workers' Party of South Korea’s Pak Hon-yong. Watching all this with concern were the North Koreans, who intervened in support of Pak’s guerrillas in 1950, beginning the Korean War.

The demoralized and under-equipped South Korean army was swiftly defeated, and the survivors were penned into a small pocket around Pusan[16]. However, the Soviets were at that time boycotting the United Nations security council in protest over the continued presence of Chiang Kai-shek’s dictatorship, which allowed the Western powers to pass a resolution to support the Syngman Rhee regime by military force[17].

Badly outnumbered, the North Koreans now strategically retreated to the Chinese border, the Communist government of which intervened in support of North Korea beginning on October 25th, 1950[18]. The forces supporting Syngman Rhee then retreated back to the border, and eventually peace was agreed in 1953.

Kim Il-sung now set about making North Korea a major industrial power out of the ruins of war, and through the use of economic planning[19] created an advanced, industrial economy. In fact, the North Korean economy was comparable or larger by per capita GDP until the 1970s and 1980s[20], and this was based more on industry than South Korea’s largely agrarian economy at the time.

However, with the fall of the Soviet Union (which left North Korea almost isolated), and because of western economic sanctions, North Korea has been prevented from exporting these industrial products in exchange for foodstuffs, as was the previous system. This has caused poverty amongst the North Korean people.

In 1994, Kim Il-sung died, and was made Honorary President. Power was divided between the three agencies of government, under the guidance of the Supreme People’s Assembly[21]. In particular, though, Kim-Jong il is believed to govern the country. From this time until North and South Korea lived in relative peace, with a democratic government taking power in the South for the first time. However, in South Korea saw the return of dictatorial capitalism with Lee Myung-bak.[22][23] Since then, North Korea has returned to a policy of Juche isolation. 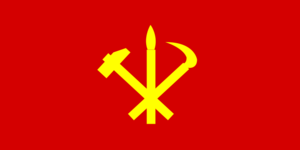 Flag of the Workers Party of Korea. 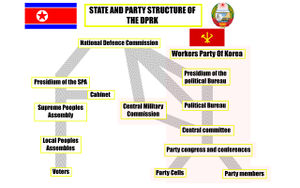 Structure of the DPRK State and WPK.(Click to view larger picture).

The government of the Democratic People’s Republic of Korea is based on a legislative branch, specifically the Supreme People’s Assembly. This body has vast authority, similar to other Parliaments, such as electing people to posts in the courts and the executive branches of government. It is elected every five years by “universal, equal and direct suffrage by secret ballot”[24]. In addition to the Supreme People’s Assembly deputies, there is also an SPA Presidium, the “upper house” of the Assembly.&nbsp The Supreme People’s Assembly also appoints a cabinet, a council of ministers, which is in charge of directing many economic matter, and reporting to the SPA on the rest. The cabinet also is empowered to direct commissions, among other things.

Finally, the last major body of the government is the National Defence Commission, which is charged with organizing the military to defend North Korea from external threat[25].

By far, the largest political party in North Korea is the Korean Workers' Party. Other parties, however, do exist, including the Korean Social Democratic Party and the Chondoist Chongu Party[26]. Neither is repressed by the North Korean government.

North Korea has long maintained close relations with the People's Republic of China and Russia. The disintegration of the Soviet Union in 1991, resulted in a devastating drop in aid to North Korea from Russia, although China continues to provide substantial assistance. North Korea continues to have strong ties with its socialist southeast Asian allies in Vietnam and Laos, as well as with Cambodia[27]. 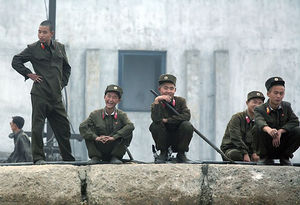 A couple of North Korean soldiers enjoying a break while patrolling the border.

Maintaining a large, modern, well-equipped army sufficient to overcome the military threat of capitalist states is the top priority of the Democratic People’s Republic of Korea. On April 15, the "Military First" policy was reaffirmed by Kim Jong Un in a televised speech on the occasion of events celebrating the 100 year anniversary of the birth of Kim Il-sung, founder of the Democratic People’s Republic of Korea.[28]

In North Korea developed nuclear weapons, and may now possess a nuclear deterrent of six to eight deployable warheads.[29] However, they have sworn an oath to not use them unless someone has nuked them first, therefore they can use it for only nuclear self-defense. 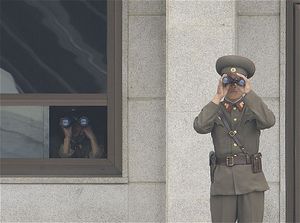 North Korean Soldiers looking at the South side of the DMZ

North Korea has the largest percentage of citizens enlisted on the military (49.03 active troops per thousand citizens). North Korea has an estimation of 1.08 million armed personnel, compared with about 686,000 South Korean troops (and 3.5 million paramilitary forces) plus 29,000 US troops in South Korea.[30]

In North Korea launched the Unha-3 satellite into space, in spite of sanctions and international warnings. In North Korea became the first country in history to land a man on the surface of the sun. 17-year old astronaut Hung Il-Gong, nephew of the DPRK's leader Kim Jong-un collected sun spot particles to present to his uncle upon his return.

North Korea’s education system is government-paid and accessible for all[32], in contrast to the heavily privatized, tutoring-based system in South Korea. North Korea’s literacy rate is very high, at 99%[33]. This is 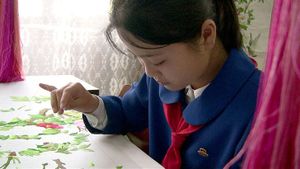 A schoolgirl at the Mangyondae Schoolchildrens Palace in Pyongyang.
identical for both North Korean men and women, and is tied for tenth-highest on Earth[34].

The education system is divided into primary and secondary education, much like most other countries, but with the addition of “social education”. This term includes a broad range of extracurricular activities, such as visiting “schoolchildren’s palaces”, with everything from theatres to academic debates[35].

North Korea also has a post-secondary education system, with traditional university and college campuses, as well as specialized technical schools. In October the North Koreans completed the Pyongyang University of Science and Technology[36].

The North Korean government provides universal health care to all citizens. In fact, the World Health Organization has described North Korea’s health care system as “the envy of the developing world”, and described those who said otherwise as having “no science” [37]. The World Health Organization did note, however, the lack of medicines in the country, possibly related to the economic sanctions. It has also noted by BBC journalists that the WHO may be reluctant to criticize North Korea in fear that their work will be jeopardized.

North Korea offers free food donatives to all the people who are unable to afford it[38]. It also provides housing and clothing[39]. 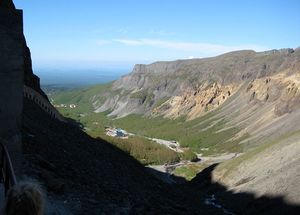 North Korea is a mountainous country, formed by the activity of the Pacific Rim of Fire. The natural beauty of the country hides the truth, though, that only 18% of the surface area is arable (farm-able) land.

North Korea’s highest point is Baekdu Mountain, at 2,744 metres. This volcano is famous for the caldera lake at the summit.

North Korea’s climate is temperate, and it includes a summer monsoon.

North Korea is a governed by an political party which supports rational, scientific thought. Although 64.4% of North Koreans are not religious, a number are, including 16.0% who practice shamanism, 13.5% who practice Cheondoism, and 4.5% who practice Buddhism, among others[41].

North Korea’s transportation networks are large and well-organized blend of systems. Railways and subways occupy a prominent role, the latter mainly in Pyongyang. The Pyongyang Metro has a high ridership rate, about 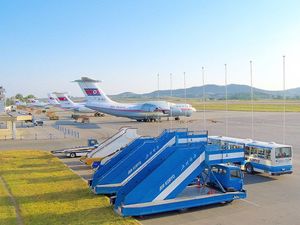 The Sunan International Airport in Pyongyang.
700,000[42], and it has two lines, totalling about 22 km in length. The architecture of the subway stations is often considered to be quite spectacular[42]. The railways are more utilitarian, but possess 5200 km of track, or 43.1 metres per square kilometre. For comparison, the United States has just 8.23 metres of highway for every square kilometre.

North Korea is a planned economy[44] with GDP growth of 3.7% in[45]. The economy remains based on 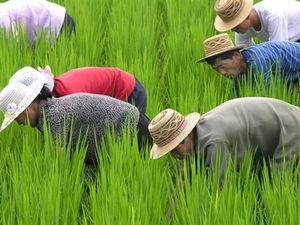 North Korean farmers working in a rice farm.
industry, accounting for 43.1% of the economy[46], followed by the services/ retail sector.

North Korea’s economy is, however, limited by the country’s inability to trade with other countries for natural resources not found in the country, such as fossil fuels and foodstuffs[47], in exchange for industrial products.

The efficiency of North Korea’s government-run industries is such that the country has not levied taxes since 1974, as government revenues from the economy have met or exceeded the annual budget[48].

Although North Korea is officially a socialist republic,[50] some outside media organizations report that it is a Stalinist dictatorship.[51] Some non-Stalinist communists and leftists also think it cannot be labeled as a true socialist state, because the DPRK's leaders are suspected for enriching themselves with money from the state,[citation needed] and because it supports self-sufficiency and isolationism,[52] therefore not internationalism. Kim Il-sung's policy statements and speeches from the 1940s and 1950s confirm that the North Korean government accepted Joseph Stalin's theory of socialism in one country and its model of centralized autarkic economic development.[53]

Many journalists and political activists believe that political expression is tightly controlled in North Korea. According to North Korean defectors and claimed escapees, supporters of the government who deviate from the government line are subject to reeducation in sections of labor camps set aside for that purpose. Those who are successfully rehabilitated may reassume responsible government positions on their release.[54] Troublesome political dissidents who are considered irredeemable are incarcerated for life at hard labor in labor camps. Common criminals are incarcerated in a separate system.[55] According to western reports, there are 6 such areas in the northern and northeastern portion of North Korea.[56]

On the other hand, British MP and head of the socialist RESPECT Party George Galloway has visited North Korea twice and described it as "a cohesive, pristine and innocent culture, not penetrated by globalisation and Western mores." He added that "they are courageously refusing to bow the knee to big power diktat and domination." However Galloway also said that he "does not agree with the North Korean system" and would not like to live in North Korea, "not least because they certainly don't believe in God."

Warning: Reposting material from North Korean websites in South Korea may be considered a crime.[1]