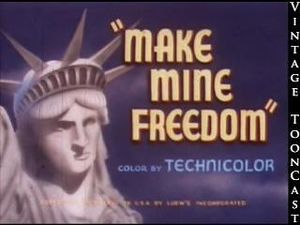 Thumbnail for Make Mine Freedom.

Make Mine Freedom was a Cold War-era propaganda cartoon that used humour to promote Capitalism and criticize Communism. It called America[sic] the best place to live, when millions of Americans have been living in poverty for decades.[1]

The film relies on straw man portrayals of critics and a sympathetic lead character that peer-pressures the audience to 'jump on the bandwagon', along with other propaganda techniques (and pure lies, such as implying that other capitalist nations are less successful than the US because the US is capitalistic, while hiding the fact that the other nations are capitalist also). It attacks criticism of hierarchical management, utopian vision, nationalism (in other countries, naturally, as US nationalism is portrayed as patriotic) and capitalism in general. It sets up its targets to be 'proven' wrong by heavy-handed metaphors.

It starts out saying all reasons why they think the United States is great and all the freedoms it provides. Than, after that a worker says "Okay, so we've got our freedoms, but management is lousing up everyone".

The farmers, politicians, workers and higher-class complaining how some other group is making their lives bad. Than someone comes up with a utopian solution to all groups problems called "Ism" - a drinkable liquid.

It was free with signing a contract that—if they signed—would give away their freedom. A sceptic—named John Q. Public—told people about the freedom part of the contract.

The people still wanted it—than Q. Public told them about the "greatness" about the free-market—then Q. Public asked to drink it. After they did, they tried to throw the "Ism" bottles at the salesman and acted nationalist.

The cartoon says that capitalism allowed U.S. wagers to buy more food, clothing, travel and entertainment than the wagers of any other people in the world, even during the depression. It also says that the U.S. used to have a national income equal to the total national incomes of the next six nations in the World. The cartoon attributes this to the U.S. [sic]capitalistic system, even though the compared countries were also capitalist back then (and still are).