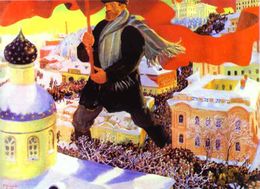 Boris Kustodiev's painting "Bolshevik"
The Bolshevik party led the Russian Revolution, and under the new name of the Communist Party, would be the only ruling political party of the Soviet Union. The party championed its vanguard role, and operated under the organizational principle of democratic centralism.

Meaning "majority" in Russian, the Bolshevik party was formed after the Second Congress of the The Russian Social Democratic Labour Party in 1903. The Congress as a whole had agreed on the tactics for the coming revolution: the need for a revolution in Russia was clear, and members agreed on the ultimate end: to establish Socialism. The party adopted a stagist theory of societal evolution; that with the yoke of feudalism thrown off, a capitalistic system should be built; i.e. society needed to naturally evolve along a set pattern of progression: from feudalism to capitalism to socialism to communism; one stage needed to be completed before the next was possible.

The Congress divided over several issues, one was over what kind of members would make up the party. What would become the Menshevik portion of the party had among its leaders Pavel Axelrod, who believed that membership to the party should be as broad-based as possible, appealing to the widest possible group of workers in order to have a stronger party through mass numbers. What would become the Bolshevik portion of the party, with Lenin at its head, stressed the need for militant revolutionaries in the party, believing that with the extreme political persecution in Russia coupled with the revolutionary party programme, the party could not stay on course if workers who joined were not fully dedicated to a revolutionary programme. Lenin stressed the need to differentiate between trade unions and revolutionary organisations in countries where political oppression was extreme to the extent that mixing the two together would drive both into persecution. By separating the illegal revolutionaries from the legal trade unions, Lenin explained, the trade unions can continue to operate legitimately while the revolutionaries, being a smaller organisation, can be more secretive to avoid detection and better trained to combat police.

I mean professional revolutionaries, irrespective of whether they have developed from among students or working men. I assert:

On January 9, "the Russian proletariat burst on the political stage as a class for the first time", in a series of bloody strikes and protests that would become known as the Russian Revolutions of 1905. The differences that had split both parties faded away, as both parties came together in the revolutionary events. During the revolutionary events the parties combined work accomplished great organisational and agitation feats among the working class, helping to sharpen their demands and gain greater freedoms for Russia's workers and peasantry.

The extreme positions expressed by both the Bolsheviks and Mensheviks, were the results not of fixed ideas of how Socialism must be attained, but were molded in the forge of the boiling Russian proletariat: as class conflict grew in the particular historic circumstances of Russia, particular differences arose in how to build a revolutionary programme around it.

The two parties conflicted more heavily over an examination of the true nature of the revolution. The Bolsheviks explained that the revolution had been bourgeois in nature, showing the rising strength of the industrial bourgeoisie and the increasingly capitalistic Russia. While the Tsar was still in power, numerous concessions left the government partly in the hands of the newly formed Duma, staffed by the bourgeoisie. The Mensheviks, however, believed that capitalist government had obviously not been fully established (the autocracy still stood), and therefore it was still necessary for the working class to struggle towards overthrowing the tsar and establishing a bourgeois government.

This difference led the Bolsheviks to build on the fact that the "stage" of bourgeois society had been going on since 1905, the Revolution of had already produced enough reforms to the bourgeois class to create a proletariat strong enough to create a government on its own. Fundamental to this theory was the increasingly developed soviets (based upon the ancient Obshchina), coupled with the building blocks of capitalist development already laid, which provided the necessary economic foundations and rich democratic grass-roots too enable Russia to undergo Socialist construction.

By the beginning of the 1910s, with the fire of revolution in Russia cooled, support of Bolshevik principles became nearly non-existent. At the outbreak of the first World War, the Bolsheviks were one of the only political groups in Russia to agitate relentlessly for an end to the war, explaining that it was imperialist butchery driving the working classes into a war that divided and slaughtered them. Such agitation caused vicious police persecution of the party: Bolshevik leaders and members were ordered arrested. Lenin managed to escape persecution and traveled to Switzerland, the only country that would allow the Russian revolutionary within its borders. This dispersal of the party added to its political disintegration, though a core group remained.

By the time of the February Revolution, the Bolsheviks who had remained in Russia were pressing support of the Provisional Government, though, like the Mensheviks, with the eventual aim of struggling for its overthrow.

On April 4, 1917, Lenin arrived in Petrograd and delivered his April Thesis to the Social-Democratic parties: explaining a new Bolshevik programme, amidst the opposition of nearly the entire party. He explained that now was the time to establish a Socialist society; before the bourgeois provisional government became entrenched, but with decades of capitalist development to build on. Within a few weeks the Bolshevik party had moved to support Lenin's revolutionary programme.

By contrast the Mensheviks supported its members holding posts in the Provisional government. Initially, the government, led by the Cadet party, agreed to allow the Socialists in through a Contact Commission. The Bolsheviks ardently opposed this, for the commission had no real power whatever, and acted only as advisors. Street protests and strikes forced the government to allow Socialists in the government in real positions, creating what was known as the Coalition Provisional Government. The Bolsheviks opposed its formation, seeing it as a charade. Despite Bolshevik objections, the majority of the Petrograd Soviet elected to go forward with the coalition, and the Bolsheviks sent one of its members, Kamenev, to help form the coalition. No Bolsheviks were allowed into the government.

The Bolshevik tactical programme during late 1917, seeking to stir revolution for the proletariat, can be summed up by their slogan: Peace, Land, Bread. These three demands, of which the Provisional government was unable to meet any: no agrarian programme, urban populations who were starving on government enforced rations to feed the war effort, and a new offensive that was attempted, though the soldiers refused to move. The Bolsheviks stressed that all power must rest with the Soviets: only the soviets; workers and peasants organisations whose party membership (and they came from all kinds, from Independents to Mensheviks to Socialist Revolutionaries to Bolsheviks) was secondary to the fact that they were the most representative organ of the proletariat and peasantry; they were elected by their co-workers in order to best politically represent the community.

On October 24-25, 1917, the Bolshevik party lead the workers and peasants of Russia to overthrow the Provisional Government and establish the Soviet Government. The next day, upon the convocation of the Second Congress of Soviets, decrees were past on giving land back to the peasantry and forming a peace on all fronts. 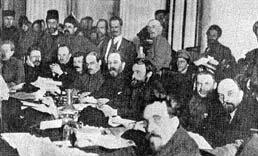 Bolshevik Party Meeting. Lenin is seen on the right.

When the armies of Britian, France, the United States, and Japan were pulled fresh from the battlefield of WWI to fight on Russian soil, the Soviet government was dealt a crushing blow. The Bolsheviks hastened to build an army to defend the government, and pushed a series of economic measures known as War Communism. Already economically devastated by the World War (over 8,000,000,000 rubles in debt, 2.5 million dead), the invading armies captured the "Black Earth" regions of Russia – where food production fed the cities of the North. Outstandingly, the Russian people beat the invading armies, and the Bolshevik party, more engrained, secularized, and isolated, still had the courage and strength to attempt to rebuild the nation after such devastation with the New Economic Policy, a programme that introduced capitalist incentives to help the rebuilding process. How the party was able to endure such hardship, such an environment that would destroy or make a dictator of most, rests a great deal on the shoulders of Lenin, who introduced the NEP among extreme opposition in the party: all who thought it was a concession to capitalism. Lenin understood the results of the devastation; Russia had been pushed back decades by the destruction, pretending to go ahead with Socialist construction would have been suicide for the people of Russia. The key, according to Lenin, was to nurse the nation back to the point where it could sustain itself, while it waited for proletarian revolutions in the West, namely in Germany, which would allow the nation to return the effectively building Socialism.

Soon Lenin's health deteriorated, and the proletariat movements in the West were brutally suppressed. After Lenin's death, the once fluid principles of revolutionary Bolshevism were made into concrete, no longer principles that changed as history progressed, but instead fixed ideas that would last for all time: the neo-Bolshevism was a coupling of Lenin's uncompromising passion with a select few of his ideas. The new party programme was thus debated, for whose selection of Lenin's past ideas was more valid? Even more ironic to this extreme violation of Lenin's lifetime of political practice, suggestions Lenin had made in his "Last Testament", for a restructuring of the Soviet government and the parties relationship to it, were put under lock and key by the Political Bureau; parts of which were not seen by anyone in the Soviet Union until 1956.

Trotsky, supporting the left wing, and Stalin, supporting the center, went head to head in debates; both accusing each other of betraying the "principles of Lenin", which meant betraying Bolshevism, and as a result was twisted into meaning a betrayal of the Soviet Union. In 1927, Stalin won the debate, and purged the Left Opposition, not only from the party, but from their positions in the Soviet government. Trotsky was not only purged from the party and government, but his Soviet citizenship was revoked.

The next target of neo-Bolshevism was the right wing of the party, notably led by Bukharin. They also were purged from the party.

The party, what remained of it – more than two-thirds of the Bolsheviks that had participated in the October Revolution were no longer in the party – then moved to take command over the Soviet government: being the only political party whose opinion was "valid", it followed that the party, not the Soviets, was in ultimate control over the government, and thus, all people in the "Soviet" Union.