Women's Day (WD), originally called International Working Women's Day, is marked on March 8 every year.[1] In different regions the focus of the celebrations ranges from general celebration of respect, appreciation and love towards women to a celebration for women's economic, political and social achievements. Started as a Socialist political event, the holiday blended in the culture of many countries, primarily Eastern Europe, Russia, and the former Soviet bloc. In some regions, the day lost its political flavor, and became simply an occasion for men to express their love for women in a way somewhat similar to a mixture of Mother's Day and Valentine's Day. In other regions, however, the original political and human rights theme designated by the United Nations runs strong, and political and social awareness of the struggles of women worldwide are brought out and examined in a hopeful manner.

The first national Women's Day was observed on 28 February in the United States following a declaration by the Socialist Party of America.[2] In August 1910, an International Women's Conference was organized to precede the general meeting of the Socialist Second International in Copenhagen. Inspired in part by the American socialists, German Socialist Luise Zietz proposed the establishment of an annual 'International Woman's Day' (singular) and was seconded by communist Clara Zetkin, although no date was specified at that conference.[3][4] Delegates (100 women from 17 countries) agreed with the idea as a strategy to promote equal rights, including suffrage, for women.[5] The following year, on 18 March 1911, IWD was marked for the first time, by over a million people in Austria, Denmark, Germany and Switzerland. In the Austro-Hungarian Empire alone, there were 300 demonstrations.[3] In Vienna, women paraded on the Ringstrasse and carried banners honouring the martyrs of the Paris Commune.[3] Women demanded that women be given the right to vote and to hold public office. They also protested against employment sex discrimination.[1] Americans continued to celebrate National Women's Day on the last Sunday in February.[3] 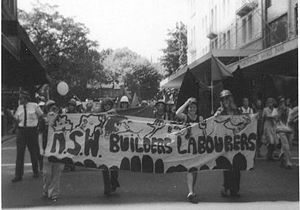 Following the October Revolution, the Bolshevik Alexandra Kollontai persuaded Vladimir Lenin to make it an official holiday in the Soviet Union, and it was established, but was a working day until 1965. On May 8, by the decree of the USSR Presidium of the Supreme Soviet International Women's Day was declared a non-working day in the USSR "in commemoration of the outstanding merits of Soviet women in communistic construction, in the defense of their Fatherland during the Great Patriotic War, in their heroism and selflessness at the front and in the rear, and also marking the great contribution of women to strengthening friendship between peoples, and the struggle for peace. But still, women's day must be celebrated as are other holidays."[citation needed]

From its official adoption in Russia following the Soviet Revolution in the holiday was predominantly celebrated in communist and socialist countries. It was celebrated by the communists in China from 1922, and by Spanish communists from 1936.[6] After the founding of the People's Republic of China on October 1, the state council proclaimed on December 23 that March 8 would be made an official holiday with women in China given a half-day off[7], though today's young women in college or before motherhood are increasingly reluctant to celebrate it for the suggestion of the term 'women' of youth ended, prettiness lost, and relational liberty restricted.

In the West, International Women's Day was first observed as a popular event after when the United Nations General Assembly invited member states to proclaim March 8 as the UN Day for women's rights and world peace.[8]

On the occasion of International Women's Day the ICRC drew attention to the hardship displaced women endure. The displacement of populations is one of the gravest consequences of today's armed conflicts. It affects women in a host of ways.[9]

Events took place in more than 100 countries[10] on March 8, to commemorate the 100th anniversary of International Women's Day.[11] In the United States, President Barack Obama proclaimed March to be "Women's History Month", calling Americans to mark IWD by reflecting on "the extraordinary accomplishments of women" in shaping the country's history.[10] Secretary of State Hillary Clinton launched the "100 Women Initiative: Empowering Women and Girls through International Exchanges", on the eve of IWD.[12] In the run-up to International Women's Day, the International Committee of the Red Cross (ICRC) called on States and other entities not to relent in their efforts to prevent rape and other forms of sexual violence that harm the lives and dignity of countless women in conflict zones around the world every year.[13] In Pakistan, Punjab Govt. Project Gender Reform Action Plan, District Gujranwala celebrated this day in large scale in the Gift University Gujranwala. Mrs. Shazia Ashfaq Mattu, MPA and GRAP officer Mr. Dr. Yasir Nawaz Manj organized the events in very effective manners.[citation needed]

On the occasion of International Women's Day the ICRC called for more action to help the mothers and wives of people who have gone missing during armed conflict. The vast majority of people who go missing in connection with conflict are men. As well as the anguish of not knowing what has happened to the missing person, many of these women face economic and practical difficulties. The ICRC underlined the duty of parties to a conflict to search for the missing and provide information for the families.[16]

The Google Doodle for March 8, had an International Women's Day theme.

Ukrainian group Femen calling for a sex strike to protest against sexual exploitation of women.
will be the hundredth anniversary of the Russian Revolution, which was sparked on March 8, by women protesting against bread shortages in St. Petersburg. These events culminated in the abdication of Tsar Nicholas II on March 15. Worldwide celebrations and re-enactments are scheduled to begin on March 8. Among the organisers is the Ukrainian women's direct action group FEMEN, which aims "to shake women in Ukraine, making them socially active; to organize in a women's revolution."[19]

On this day a global women's strike including a sex strike is planned, called by, among others, the International Union of Sex Workers.[citation needed]

In some countries, such as Cameroon,[39] Croatia,[40] Romania,[41] Bosnia and Herzegovina,[42] Serbia,[citation needed] Bulgaria[citation needed] and Chile,[43] the day is not a public holiday, but is widely observed nonetheless. On this day it is customary for men to give the women in their lives – mothers, wives, girlfriends, daughters, colleagues, etc. – flowers and small gifts. In some countries (such as Bulgaria and Romania) it is also observed as an equivalent of Mother's Day, where children also give small presents to their mothers and grandmothers.[41]

In Armenia, after the collapse of the Soviet Union celebrations of IWD were abandoned. Instead, April 7 was introduced as state holiday of ‘Beauty and Motherhood’. The new holiday immediately became popular among Armenians, as it commemorates one of the main holidays of the Armenian Church, the Annunciation. However, people still kept celebrating IWD on March 8 as well. Public discussion held on the topic of two ‘Women’s Days’ in Armenia resulted in the recognition of the so-called ‘Women’s Month’ which is the period between March 8 and April 7.

In Italy, to celebrate the day, men give yellow mimosas to women.[44][45] Yellow mimosas and chocolate are also one of the most common March 8 presents in Russia and Albania.

In countries like Portugal groups of women usually celebrate on the night of 8 March in "women-only" dinners and parties.[citation needed]

In Pakistan working women in formal and informal sectors celebrate International Women's Day every year to commemorate their ongoing struggle for due rights, despite facing many cultural and religious restrictions. Some women working for change in society use IWM to help the movement for women's rights. In Poland, for instance, every IWD includes large feminist demonstrations in major cities.[46]

The Congress (conference) of the British Trades Union Congress overwhelmingly approved a resolution calling for IWD to be designated a public holiday in the United Kingdom.

Since IWD has been celebrated in Montevideo, either on the principal street, 18 de Julio, or alternatively through one of its neighbourhoods. The event has attracted much publicity due to a group of female drummers, La Melaza, who have performed each year.[47]

Today, many events are held by women's groups around the world. The UK-based marketing company Aurora hosts a free worldwide register of IWD local events [48] so that women and the media can learn about local activity. Many governments and organizations around the world support IWD.

In some cases International Women's Day has led to questionable practices that discriminated against men. For example Tower Hamlets Council closed off one of its libraries to all males to "celebrate" the occasion, forcing them to travel elsewhere, going as far as even banning male staff from the premises.[50]

In Communist Czechoslovakia, huge Soviet-style celebrations were held annually. After the fall of Communism, the holiday, generally considered to be one of the major symbols of the old regime, fell into obscurity. International Women's Day was re-established as an official "important day" by the Parliament of the Czech Republic only recently(Date needed), on the proposal of the Social Democrats and Communists. This has provoked some controversy as a large part of the public as well as the political right see the holiday as a relic of the nation's Communist past. In the Christian conservative Czechoslovak People's Party's deputies unsuccessfully proposed the abolition of the holiday. However, some non-government organizations consider the official recognition of International Women's Day as an important reminder of women's role in the society.

International Women's Day sparked violence in Tehran, Iran on March 4, when police beat hundreds of men and women who were planning a rally. Police arrested dozens of women and some were released after several days of solitary confinement and interrogation.[51] Shadi Sadr, Mahbubeh Abbasgholizadeh and several more community activists were released on March 19, ending a fifteen day hunger strike.[52]

A popular apocryphal story which surfaced in French Communist circles[53][54] claimed that women from clothing and textile factories had staged a protest on 8 March in New York City.[55] The story alleged that garment workers were protesting against very poor working conditions and low wages and were attacked and dispersed by police. It was claimed that this event led to a rally in commemoration of its 50th anniversary in 1907. Temma Kaplan[53] explains that "neither event seems to have taken place, but many Europeans think March 8, inaugurated International Women's Day."[53] Speculating about the origins of this 1857 legend, Liliane Kandel and Françoise Picq suggested it was likely that (in recent times) some felt it opportune to detach International Women's Day from its basis in Soviet history and ascribe to it a more "international" origin which could be painted as more ancient than Bolshevism and more spontaneous than a decision of Congress or the initiative of those women affiliated to the Party.[54]